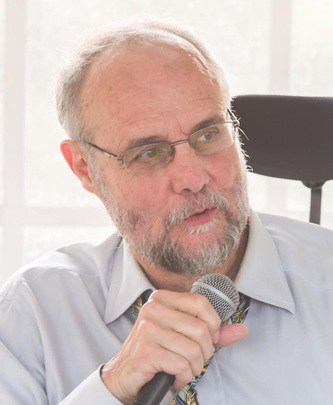 After living with ALS for 6 years, Thomas “Tom” Francis McKendy died from complications of a stroke on December 21, 2019 at the age of 74. He is survived by his wife, Beverly (nee Birkman), daughters Annie (Anna-Kate) and Katherine, grandson Ben, brother Joe (Connie), and many cousins and nephews. He is predeceased by his mother, Anna (nee Martin), and father Francis “Buds” McKendy.

An Ottawa native, Tom studied English and Mathematics at St. Patrick’s College before going to the University of Michigan to pursue a PhD in English Literature. A proud Wolverine, his years at Michigan were not all work; not only did he have many a rowdy night at Fun Castle, he also played football “at Michigan” and met Beverly, all while writing his thesis on a typewriter.

In 1975, Tom moved to Montreal, where he devoted his career to education as a beloved professor of English and Humanities at Marianopolis College. He was an active member of the Marianopolis community, serving as the chair of the Liberal and Creative Arts department for many years. He also co-founded the Marianopolis Refugee Committee, sponsoring families from Southeast Asia, Africa and Latin America, helping them settle in and build lives in Montreal.

In 2003, he moved to John Abbott College, serving as Associate Academic Dean, where he continued to work for two years after his diagnosis.
Although as a teacher he loved to proselytize about the solitude of Walden’s pond, Tom was very much a man of the people. Family and community were of great importance to him, and these values ensured that he was well surrounded up until the last moments of his life. His circles extended from the Dorval Old Timers hockey league, to his work colleagues at Marianopolis, John Abbott, and Concordia, to relatives in Ottawa, New Brunswick, Vancouver, the US, and beyond.
While living with ALS came with unimaginable challenges, not the least of which involved facing one’s own fallibility, he truly learned to live fully in spite of his diagnosis. He repeated often that “Carpe diem” translates accurately to “Harvest the day”, not “Seize the day” – and that he did.
We are deeply grateful that his mind, voice and spirit remained strong up until the last few days, and that he got to know his grandson Ben for 5 years.

While we are saddened by Tom’s death, we are also deeply grateful for the community of exceptional caring people Tom has built around him. We hope to be able to bring that community together again at the visitation on Friday, January 3 from 6-9 pm, and the ceremony and reception on January 4 from 1-3 pm. Both will take place at J.J. Cardinal Funeral Home (560 Lakeshore Drive, Dorval, QC).

Those wishing to commemorate Tom’s life are invited to make a donation to one of the following organizations: