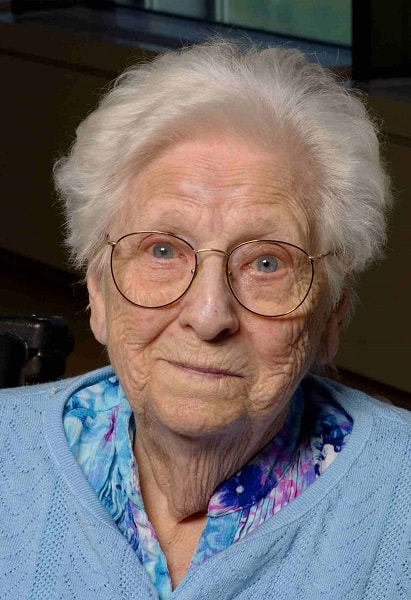 It is with profound sadness that we announce the passing of Evelyn Margaret Frauzel Tabrett, of Lachine, Québec, peacefully in the early hours of 30 November 2021, during her centenarian year. Born on 18 March 1921, to Charles and Francis (Butler) Frauzel, in Bridgewater, Nova Scotia, Evelyn was the eldest of 8 children. Growing up on a farm in Chelsea, NS, Evelyn then enlisted in the Canadian Women’s Army Corps during World War II, serving as a Private in Maidenhead and Slough, UK, from 1942 to 1945.

It was as she was to be deployed in Halifax, NS, that she met the love of her life, the late Sgt. John Harvey Tabrett, lifetime member of the Black Watch (RHR of Canada) and the Scarforth Hylanders of Canada, of Montréal, QC. The two would keep in touch across their time serving in the Canadian War Effort and would marry on November 12, 1945, at St. Peter’s Church in Burnham, Buckinghamshire, UK. John and Evelyn returned to his native Montréal and settled in Lachine, where they would build their lives together for the next 54 years, and raising their only child, their daughter, Judith Ann. Evelyn lived a quietly fulfilling life, enamored with her husband John, their cats and their expansive stamp collection. Evelyn created splendid knitting, crochet and quilting work and the best coconut cream pie in the world, all the while never missing Her Majesty Queen Elizabeth’s Christmas address or news on the Royal House of Denmark.

Evelyn is predeceased by her husband; parents; brothers, Glendon (Lorraine) of LaBelle, NS; Paul, of Toronto, ON; John (Margaret) of Halifax, NS; and Roderick (Belle) of Chelsea, NS; sister, Norma, of Chelsea, NS; and aunt, Edna-Mary Morrell, of St. John, NB, with whom Evelyn held an especially dear, life-long friendship.

The family holds deep gratitude to Evelyn’s neighbours, Stan and Karen Balchunas, of Lachine, for their selfless dedication and uncompromising friendship with Evelyn, as well as the care team at Ste-Anne Veteran’s Hospital, in Ste-Anne-de-Bellevue, for their tireless and compassionate care of Evelyn during her final years.  A special thank-you to J.J. Cardinal Funeral Home in Lachine, for their guidance and gentle consideration during this difficult time.

A private service is to be held on Tuesday 6 September at the Cimetière-Jardins Urgel-Bougie, in Laval, where Evelyn will be once more reunited with her loving husband John. In lieu of flowers, donations to the Montréal SPCA are suggested, reflecting her deep love and lifelong dedication to animals.