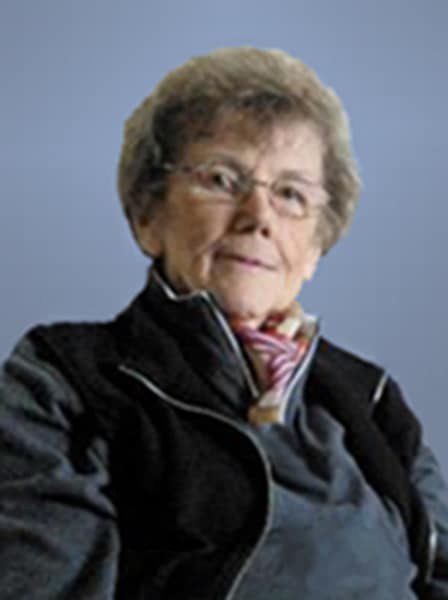 Geraldine Mary Hodgson McCarthy died peacefully at age 99 years and 10 months, in the company of family, at LaSalle General Hospital, on December 30, 2020 – shortly after a beautiful 100th Christmas at her Les Belvédères de Lachine residence.

Gerry is now reunited with her dear husband Luke Walsh McCarthy, who passed away in 1977. Mom will be lovingly remembered forever by her children Joan, Peter and Maureen; and grandson Antony. She is also survived by her brother Ted (the late Elsie), and three generations of nieces and nephews.

Mom was born in Deseronto, Ont., and also lived in Shawinigan, Three Rivers, NDG-Montreal, and Lachine, Que. Her primary through post-secondary education at Collège Sainte-Anne, Lachine, included one of the very first Bachelor of Music (piano) degrees from Université de Montréal (in conjunction with the Congregation of the Sisters of St. Ann).

She and her siblings were among the earliest members at NDG’s Monkland Tennis Club in the 1940s. In the early 1950s, she joined Air Canada (AC) predecessor Trans-Canada Air Lines (TCA), which led to some interesting propeller-era transatlantic adventures – and marriage to Luke, a career TCA-AC man since the late 1930s (and WW2 RCAF veteran). Gerry and Luke would later show their young children the wonders of ancient churchyards – and alehouses – during vacations in Ireland, Scotland, England and mainland Europe.

Gerry shared her musical talent – as an entertainer at Monkland Tennis Club parties, then as a piano teacher and as parish organist at Resurrection of Our Lord Parish, Lachine (now St. John Paul II Parish). In more recent years, she found a new vocation as a “volunteer music therapist” playing piano to the delight of her fellow seniors. Painting, drawing and calligraphy groups also kept her busy, and were the source of long-lasting friendships with Kate, Wendy, Shirley, Kay and Maureen, Mona, Pauline and many others. Her move to “The Belvs” in 2007 showed us all that it’s never too late in life to make new friends, and even meet up again with a childhood pal – Georgiana.

Her strong faith was always an important part of her life, and a real gift during her more recent challenges. That devotion was nicely complemented by the support and loving care of many. Special thanks to Bonnie for her dedicated daily companionship for five solid years; to every member of the team at Les Belvédères de Lachine; to the paramedics and LaSalle Hospital Emergency staff; and to Father Jack, Father Piotr, Deacon Ciaran, Nora, and the Pastoral Home Care Team at St. John Paul II (formerly Resurrection) Parish in Lachine. And to anyone inadvertently overlooked here, working quietly behind the scenes – thank you! As Mom would say: “St. Ann, St. Joseph, St. Anthony, St. Francis, St. Thérèse of Lisieux and the Blessed Virgin Mary, pray for us!”

Funeral arrangements entrusted to J.J. Cardinal, Lachine, Que. Cremation has taken place. Celebration of Life details to follow at a later date. In lieu of flowers, please give to the charity of your choice, or volunteer, or play a tune, or make someone laugh.