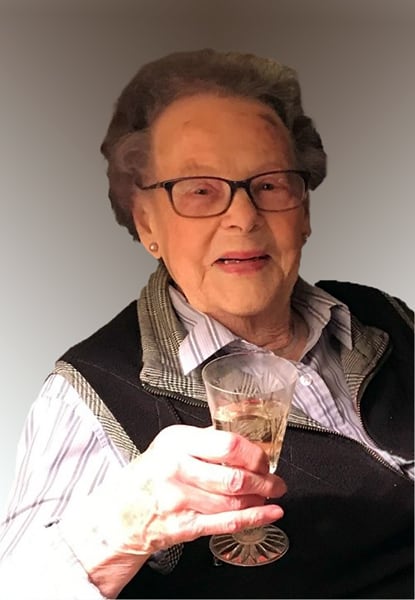 It is with great sadness that we announce the passing of Joyce Rosalie Amos on October 31st, 2022 in Montreal, after a long life well lived.  She had just recently relocated from Ottawa to Montreal to be closer to her family and we were looking forward to this new chapter.  We had the impression that our mother would live forever.

Daughter of Charles Johnson and Lucy May Gibbs, newly arrived from England, she was born in Melaval, Saskatchewan in 1926 and she survived the great depression like many other Canadians.  Joyce was forever proud of her English background and the Johnson family history.  She was the last living member of the five children in her family, many who also lived to almost 100 years young.

She will be deeply missed by her daughter, Janet and son, Ian (Sadmira and son Kenan), her grandson Ryan (Emma) and great grandchildren Ella and Cole, as well as her numerous nieces and nephews and their families.  She took great pride in all of their accomplishments and thought of them often, despite the distances that separated them.

She was predeceased by Keith Amos, her husband of almost 46 years, in 2003.  During their marriage, which began in Winnipeg, they relocated several times, including to Brandon, Montreal and finally to Ottawa when Keith retired.  They made many friends and memories along the way.  Keith and Joyce enjoyed square-dancing in both Montreal and Ottawa.

Joyce showed great courage in the years following her husband’s death, and developed a circle of friends that she met at the Kanata Senior Center and in the Atriums where she lived.  She was a great fan of music from “the good old days” and enjoyed time spent listening to live bands with friends.

A commemorative gathering will be held at Pinecrest Cemetery in Ottawa on Sunday, November 13th from 12:00 to 14:00 for friends and family.  There will be a private interment of ashes the next morning.

Memorial donations, in lieu of flowers, may be made to the Jewish General Palliative Care Centre, in her name, using the following link: https://secure.jghfoundation.org/site/TR/DIY/DIY_2021?px=1103273&pg=personal&fr_id=1060

The family wishes to extend their gratitude to the wonderful medical team at the Jewish General Palliative Center for the high level of care that was provided to her.  We will be forever grateful.  We would also like to thank everyone for their kind words and support during this difficult time.