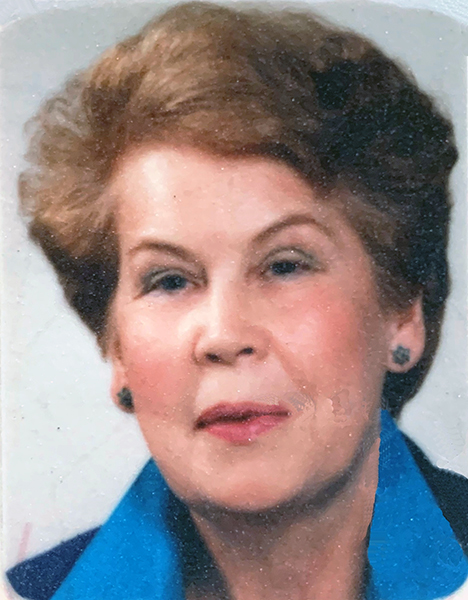 Joyce Maureen Barrett Blackwood, nee Boström, died peacefully at Ste-Anne’s Veterans Hospital on the 20th of May, aged 99 years.  Her nephew was by her side.

Born in 1923, in Hastings, England to Charles Bostöm and Irene Finch.  Joyce with her siblings Victor and Dorothy had a varied childhood of comfort and times of trial.  When their mother remarried in the 1930’s, their brother John was added to the family.  In late 1941 she met Charles Barrett, a young dashing chap serving with the Canadian Army.  They met at an evening dance being held by Charlie’s regiment in Copthorne, West Sussex, where Joyce lived with her mother, sister and younger brother.  As Joyce recounted Charlie asked her to dance and that was it.  They married in 1942 at St. John’s parish church in Copthorne, where one of Charlie’s brothers, serving with the Canadian Hussars, was in attendance.  Joyce’s older brother was unfortunately not able to be there as he had been captured by the German’s and was imprisoned in Northern Italy.

Upon marrying, the Canadian Forces quickly approached Joyce to sign up to serve, which she did.  She was recruited to the Royal Canadian Air Force, working in their London record’s office dealing with correspondence for service members killed in action.  Joyce sailed to Canada as a war bride near the end of the war in March 1943, a month ahead of her husband, though she would recount how her husband was decommissioned before her as she was recruited into the secretarial pool at a local Canadian Forces station in Lachine.

Joyce and Charlie settled in Lachine, and with time their son Michael was born.  Charlie gained employment with Air Canada, which allowed Joyce some advantages to visit back home in England, sometimes twice in a given year.  Though ultimately Joyce spent more years of her long life in Canada, her heart was always back in England by the sea in Hastings.  Joyce and Charlie bought a house in Dorval and travelled extensively.

Sadly Joyce was to lose her beloved Charlie in 1976.  Being a product of the time where the man of the house was in charge, Joyce felt a bit lost at the beginning, but her ingenuity and perseverance allowed her to become self sufficient.  After eight years of widowhood, Joyce was fortunate to meet another loving man by the name of Alastair Blackwood.  They married in 1985, and Joyce gained a step-son and daughter.  Joyce and Alastair spent 26 wonderful years together traveling and enjoying their retirement.  Alastair adored Joyce until the day he died in 2012.

Joyce in her final years moved to a retirement residence in Pointe-Claire where she made many wonderful friends, who she enjoyed the knitting and book clubs with.  Her final two years were spent at Ste-Anne’s Veteran’s Hospital where the challenges of life were not easy for her with the loss of her mobility and ability to knit, though she kept up her lifelong love of reading till the end, a book sitting on her nightstand when she passed.

Joyce and Alastair, himself a widower, had made a pact that when they passed they would be buried with their original spouses.  They both believed that their happy time together in no way negated the love they had for their first spouses.

Joyce leaves to celebrate her life her son Michael (Debbie), resident in England, and her three grandchildren Christopher, Liam and Keralee, and several great-grandchildren, her stepson Bruce and his caring wife Trudy, who never failed to call Joyce almost daily in her final years, and their daughter Shannon, and her stepdaughter Gail (the late John), she also leaves her brother John (the late Margaret) of British Columbia, and loving niece Audrey and her nephew Cary, who will greatly miss her wisdom, laugh and endless stories of life, and many other nieces, nephews and friends.

A very special thank you to the staff at Ste-Anne’s hospital whose caring ways and dedication to the Veteran’s on the 14th floor are endless.

Funeral service to take place at St. Stephen’s Anglican Church on 12th Avenue in Lachine, Quebec at 11am on Thursday, June 30th, thence to Pointe-Claire Field of Honour.

Donations in Joyce’s memory can be made to the Ste-Anne’s Hospital Foundation or to a charity of your choice.

May she rest in peace and may light perpetual shine upon her.  Take care and God bless, dear Joyce.