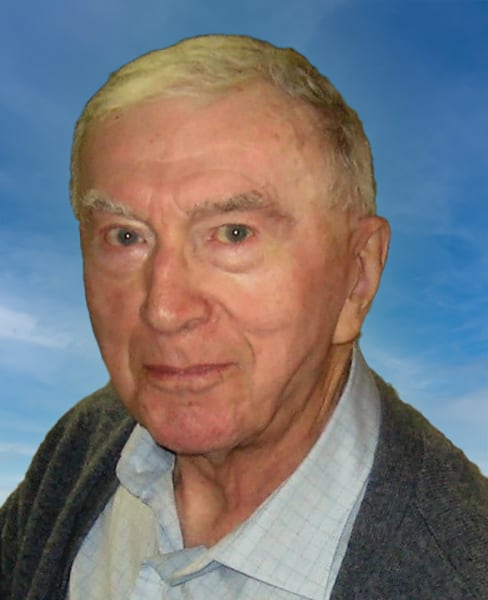 It is with sadness that we announce the peaceful passing of Gerald H Stevens, at the age of 97, after a final stubborn fight against the ailments of old age.  Predeceased by his beloved wife Ruth, his daughter Beverley, and brothers Ralph and Edwin, his memory lives on in his children Jamie (Cheryl), Sandra (Paul), grandchildren Gemma and Dexter, as well as step-grandchildren David (Kat) and Gabriel (Christelle), step-great granddaughter Heidi, and many other family and friends.

Gerry was born in Bareneed, Newfoundland.  He graduated from Memorial University College with a teaching certificate, and his first placement was in a one-room schoolhouse.  After moving to Montreal, he enrolled at Sir George Williams, where through evening classes he obtained his Bachelor of Commerce in 1954.  In 1955 he went to work for Canadian National Railways as a Systems Analyst, enjoying a 33-year career that took him to various towns in Eastern Canada.  He obtained certification as a CMA, and he was active in the Montreal chapter of the Administrative Management Society, serving as its Treasurer and President.  His teaching skills were put to use again giving evening classes in Business English at Sir George Williams, and English as a Second Language at Air Canada.  Those lessons in writing were also shared with his children, who put them to good use in their careers.

Gerry had been working in Toronto and studying for his MBA when he took some vacation in Bermuda.  There he met Ruth, also of Toronto, and they were soon married, eventually settling in Lachine to raise their family.  There are many fond memories of family trips back to Toronto by train, as well as summer vacations at the cottage on Stoney Lake.  After retiring from CNR, Gerry and Ruth enjoyed travelling in England, Europe, and back to Newfoundland.  An active member of St Paul’s Anglican Church in Lachine for over 50 years, Gerry also enjoyed woodworking, and tending to his garden.  His last few years were spent in the comfort of the Residence Belvédères in Lachine.

Donations may be made to the Lachine Hospital Foundation, or to a charity of your choice.