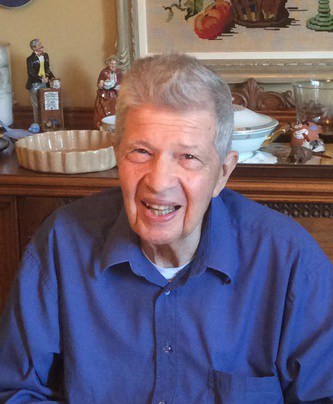 It is with profound sadness that we announce the passing of Joseph Cuccia . Married for 56 years to the late Maria Rossi , he leaves to mourn his beloved children Anne Marie ( Jean-Charles), Ronald ( Rosanna) , and Louis, who was his primary caregiver to the end. He will lovingly be remembered by his grandchildren Hélène, Rhea, Jean, Joey, Simon, Matthew, and Thomas, by his sister Marie, his brother Louis ( Carol) , his sisters-in-law Amelia (Angelo Lorini) , Lucia ( the late Nicola Rossi), as well as many cousins, nieces, and nephews. Predeceased by his father Luigi Cuccia, his mother Paolina Glionna, and his infant son Paul.
Upon graduation from the University of Toronto, he settled and worked in Montreal as a Mechanical Engineer where he also met his beloved wife. He was particularly proud of his involvement in the construction of Montreal’s Place Ville Marie. He was past president of the Montreal Branch of ASHRAE ( American Society of Heating, Refrigeration, and Air Conditioning Engineers) He continued to do consulting work many years after his retirement.
An avid reader, rarely a day went by that you did not see him with a book in hand!
In his later years, rarely a day went by that neighbours did not see him walking, accompanied by his caregiver and his dog Finnigan.
He will be dearly missed.
Resting at the J.J. Cardinal Funeral Home, 560 Lakeshore Drive, Dorval, Québec, (514)631-1511. Funeral service at St. Veronica’s Church, 1300 Carson, Dorval, on Monday, January 28, at 11:00am, thence to the Dorval Cemetery. Visitation Sunday, January 27 from 2 to 5 and 7 to 9 pm.
A special thank-you to Ruby and Jonathan from We Care Home Health Services as well as the staff at Floralies Lachine for their compassionate care.

Your expression of sympathy may be made by sending flowers or by making a donation to Alzheimer Society.