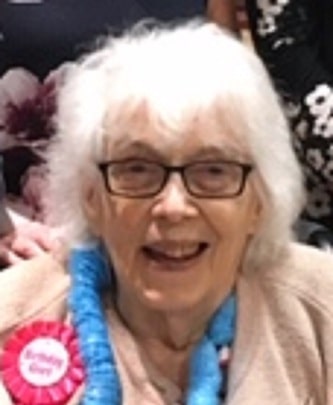 Passed away peacefully surrounded by family on October 30, 2018.

She was the loving partner of the late Tom Tucker (deceased 2007), and widow of the late Gordon Lochhead (deceased 2001). She was the proud mother of David, Mary-Anne (Michael Ryan), Peter (Isabel), Janet (Werner Hader), Mark (Heather) and Clare (Paul Choudhury), children from her first marriage to Robert Connolly. She is also survived by and sadly missed by eight grandchildren and seven great-grandchildren, Tom’s daughters, Connie and Janice and their families. She will be fondly remembered by friends at the Teapot and the C.W.L. A native of Quebec City, she made Montreal her home since 1949.

A Funeral Mass will be offered on November 6 at 11:00, in the presence of her ashes at the Church of the Resurrection of Our Lord, 34th Ave, at St. Joseph Blvd., Lachine, QC. Family and friends may pay their respects one-half hour prior to the service. Funeral arrangements have been entrusted to J.J. Cardinal, 2125 Notre Dame St., Lachine, QC. Tel. 514-639-1511. A donation in Jean’s memory to the Montreal Association for the Blind, 7000 Sherbrooke St. W., Montreal, QC H4B 1R3 would be gratefully appreciated.