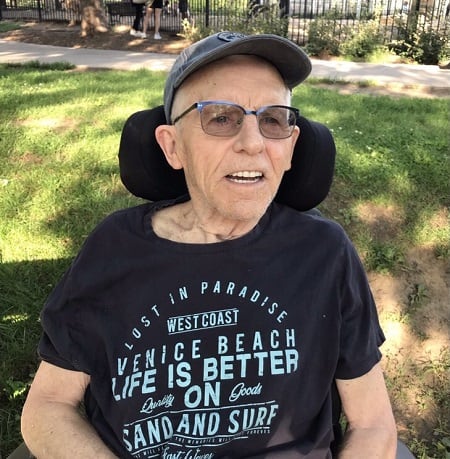 Marcel is survived by his brother Pierre Côté and his sister Claudette (Pierre) Chalifoux of Lachine, Quebec. He is also survived his niece, Nancy Gougeon (Chalifoux) her husband Stephan and their daughter Megan, of Lachine.

Marcel’s mother, affectionately known as ‘Lola’ died in 2006. Marcel adored Lola, visited her often and called her daily. (‘Allo ma Lola!’ rang through the house, every day without fail). Marcel married Yolande Laroche, now deceased, in the early 70s. They divorced after 24 years. Their only child, Jonathan, now lives in Germany.

A curious, intelligent wit, Marcel sat at the front of the class smiling in his jacket and tie, throughout elementary school. He attended College de Montréal for high school and went on to Teachers College in Amos, Quebec in 1968 before exploring the South Pacific with Yolande.

He retired early in 1997, coincidentally, on the very day he met his future husband, John. Marcel was a man of his word, committed to John and their relationship. He and John fulfilled their dream of living together in warm comfortable homes, gathering often with family and friends. Their habit was to rise early for the gym, before walking to where John taught school. They’d often meet for suppers out at their favourite Montréal restaurants.

Marcel & John took their love seriously. They recognized their fortune in having found one other, then laughed like fools in backpacks all over the world. Travel was their passion, from Mexico to South America, from Europe to Southeast Asia, many times over.

Parkinson’s Disease was Marcel’s final challenge and he faced it with all of the strength, courage and stubbornness he could summon. Despite the support of medicine, therapy, friends, family and his husband, it was too much for Marcel.

It is with profound sadness, and relief, that we wish him peace. Finally.